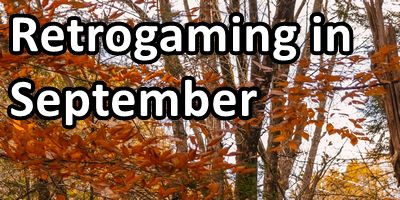 After the summer heat of August, September was a more subdued month, though over the years the history of computer and video games certainly had its moments in September.

This time, there are no death dates and only three birthdays to celebrate: well-known German author Harald Evers, who tragically died of a heart attack in 2001 at 49 years, was born on 22 September 1957. He was mainly famous (at least at these shores) for his novels, but started his career with three text and two point-and-click adventures, all in German and published by his own company, Weltenschmiede: Das Stundenglas, Die Kathedrale, Hexuma, Die Höhlenwelt-Saga – Der leuchtende Kristall and Archibald Applebrooks Abenteuer.

Just as Evers was mainly known in German, Francesco Carlà has never been famous outside of Italy, where he is considered a star of computer game production in the 80s. Born on 12 September 1961, he wrote the first thesis on video games in the world in 1984, and founded Simulmondo, at its time the biggest game company in Italy, in 1987. Nowadays, he is an expert on finances, but also new media and video games.

The third one, Dan Forden, was born on 28 September 1963. He is known as a composer mostly for pinball machines, and also for the Mortal Kombat series.

Of course, there are also several games that were first published in September. This time, I’ll list them by the day of the month. Remember that there are databases such as MobyGames where you can get more information about all of the listed games.

In 1992, the month started with the first Championship Manager on 1 September.

The mid of September was characterised by three mega-hits: Dragon Slayer, the blueprint of action (J-)RPGs, on 10 September 1984; Super Mario Bros., which I cannot possibly add anything new about, on 14 September 1985; and Ghosts ‘n’ Goblins, which has just received its latest sequel this February, on 19 September 1985.

And that ends our retrospective for this month. I hope you learned something interesting, and will return for October and the next batch of games and important events related to them throughout history.

The featured image for this article uses a photo by Marta Wave. All other images are assumed to be featured here under “fair use”.