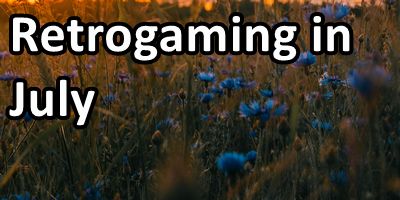 The heat of July brings with it a large number of birthdays and game releases.

There was also one death date: Dani Bunten Berry, whom I covered in a longer article, died on 3 July 1998.

As for the birthdays:

The oldest one on this month’s list is Gary Gygax, the inventor of Dungeons & Dragons, and therefore the whole genre of paper & pen role-playing, being the only one born in the 1930s: 27 July 1938. In the forties, we have Sir Clive Sinclair of Sinclair Research, the company that started the homecomputer revolution in Britain with their low-priced models, who was born on 30 July 1940, and Al Lowe, who is to this day known for his naughty humour and became famous for it with his character Larry Laffer (whose first adventure, Leisure Suit Larry in the Land of the Lounge Lizards, came out on 5 July 1987), on 24 July 1946. The 1950s saw the birth of Scott Adams, who was the first to publish a commercial text adventure with Adventureland, on 10 July 1952, and of Howard Scott Warshaw (or “HSW”), who is probably most famous for the legendary E.T. the Extra-Terrestrial on the Atari 2600, on 30 July 1957. In the 1960s, “Lord British” Richard Garriott, the creator of Ultima and several other games, who also plays a major role in his own games, was born on 4 July 1961. German games journalism superstar Boris Schneider-Johne, who also oversaw the German translations of the LucasArts adventures from 1987 to 1992, was born on 5 July 1966. Two composers share 31 July as their birthday: Ben Daglish, best-known for his wide range of tunes on the C64 and Amstrad CPC, in 1966, and Tim Wright, who started his career on the Amiga with games like Lemmings and PowerMonger, in 1967. On 26 July 1967, Tim Schafer was born who went on to write some of LucasArts’ most memorable adventure games, and founded Double Fine Productions in 2000. And finally, we close with only one birthday in the 1970s: that of Thomas Biskup, whose creation ADOM I featured in a video, on 2 July 1971.

That makes for a nice transition to the list of the other games that came out in July. Like last month, there is a whole bunch of them, so we’ll organise them into groups again, this time by country. As usual, you can find more info on all the listed games in databases such as MobyGames.

In the U.S., a third title came out on 10 July 1987: MIDI Maze. Little known today, it was one of the first games with a full 3D engine, and the first to feature networked battles between up to 16 players. Shadowgate came out on 30 July 1987, Shufflepuck Café on 6 July 1989, and the first part of Apogee’s hit series Duke Nukem (also known for a while as Duke Nukum) on 1 July 1991.

Finally, in Great Britain, 3D Lemmings (or Lemmings 3D in other countries) came out on 31 July 1995. It was the only foray of the series into the realm of first-person 3D.

And that ends this episode of my look at the months in retrogaming. Next month, we’ll enter the even hotter days of August, certainly with a whole new range of interesting dates and factoids.

The featured image uses a photo by Irina Iriser on Unsplash. The game box art and flyers are featured here under the assumption of “fair use”.