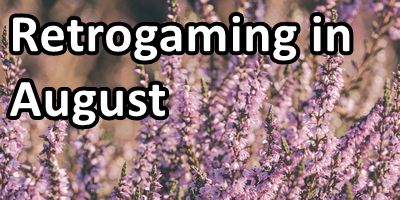 July has passed, and we enter the last hot month of the year: As we have come to expect, many things in the realm of retrogaming happened in August in the past.

A host of people were born in August, beginning in the 18th century with Mary Shelley, the author of Frankenstein, on 30 August 1797. While she was obviously not directly involved in electronic games, her debut novel was hugely influential and started a sub-genre of Science Fiction still widely evident today in all media including video games: that of the mad scientist. It also inspired several games, both adaptations and homages.

150 years later, cover artist Roger Dean was born on 31 August 1944. He is primarily known for his album artwork, but in our context, he famously designed the covers of many Psygnosis games, starting in 1986 with Brataccas.

Silas Warner, the creator of the original Castle Wolfenstein (1981), was born on 18 August 1949, and Apple co-founder Steve Wozniak, who was mentioned in these retrospectives before, on 11 August 1950. On 6 August 1960, Fukio Mitsuji, the creator of Bubble Bobble, was born, and on the same day six years later, 6 August 1966, Robyn C. Miller, who would go on to revolutionise adventure game mechanics by co-creating Myst with his brother, Rand. My friend Ramiro Vaca, who was reponsible for the graphics and music of several games in the late 80s and early 90s at Rainbow Arts, was born on 3 August 1969. And on the same day the next year, 3 August 1970, Kirby and Super Smash Bros. creator Masahiro Sakurai was born.

Finally, universal genius John Carmack – who pioneered 3D gaming with crucial contributions to the Wolfenstein 3D, Doom, and Quake engines, and then first became an important proponent of open-source software, releasing the source codes of all his major games, and later founded a company to build a lunar lander – was born on 20 August 1970.

Two companies who published games mentioned above were also founded in August: Taito (Bubble Bobble) on 24 August 1953 as an import business and Muse Software (Castle Wolfenstein) on 1 August 1978.

And with this, we get to the games. (As usual, remember that you can get more information about all the mentioned games on databases such as MobyGames.) August was a month of game series:

The only two games in this list not part of a series are Xexyz, which came out on 26 August 1988, and Legend of Kyrandia, which was released on 1 August 1992.

Lastly, Infocom has to be mentioned at least once in every instalment of this article series, and so it must be said that Stu Galley, the author of The Witness, Seastalker (with Jim Lawrence) and Moonmist (again with Jim Lawrence) died on 2 August 2018.

This ends our retrospective for this month. Be sure to be back in September and find out if the beginning of autumn had any influence on the nature of the published games.

The featured image for this article uses a photo by Ylanite Koppens. All other images are assumed to be featured here under “fair use”.