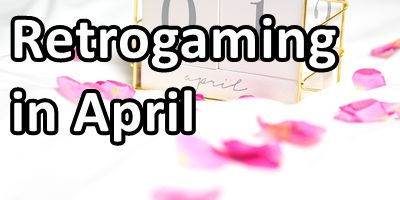 My look back at each month in the history of retrogaming will continue throughout the year, but from this instalment onward, in line with the direction Vintrospektiv is taking, it will be in English.

Of course, April is no exception as a month of many exciting things that happened over the years. There are a number of anniversaries to be celebrated – and mourned –, and also many games and machines came out in April.

Let’s start this time with the sad part: April 8th, 2012 marks the death of Jack Tramiel, the founder of Commodore and later head of Atari Corporation. I already mentioned his birthday in my very first Vintrospektiv article, which also started this series of retrospectives.

But there were also lots of birthdays in April.

The oldest person in this list, Ken St. Andre, is mysteriously not too famous, given that he invented Tunnels & Trolls, one of the first role-playing games after Dungeons & Dragons. In terms of retrogaming, he co-designed the original Wasteland (with Liz Danforth and Mike Stackpole, who were involved in one way or another in almost every role-playing game add-on of the 80s). His birthday is April 28th, 1947.

Richard Joseph and Terry Pratchett were already mentioned in the March instalment of this series with their dates of death, but they were also born in the same month: Pratchett on April 24th, 1948, and Joseph on April 23rd, 1954.

Artist Dave Gibbons, who created some of the most revered comic books of all time, notably Watchmen and Give Me Liberty, but also designed the graphics for Beneath a Steel Sky (as well as its 2020 sequel, Beyond a Steel Sky), was born on April 14th, 1949.

Don Woods was born on Aril 30th, 1954. In the late 1970s, he famously expanded Will Crowther’s Adventure, which was at that point largely a spelunking simulation, and added a scoring system and puzzles, thus creating the genre of the adventure game (more precisely, the text adventure game, but it took some more years until the first graphics entered into the genre).

Again, there were several composers born in April: David Whittaker on April 24th, 1957, Johannes Bjerregaard on April 14th, 1970, and Barry Leitch on April 27th, 1970. David Whittaker was active on many systems of the 1980s and 90, and composed the music for more than 250 games, among them classics like The Sentinel, Xenon and Speedball. Johannes Bjerregaard, a jazz musician and former member of the Maniacs of Noise, was responsible for many demos and games such as Storm Lord and Flimbo’s Quest. Scotsman Barry Leitch is mostly known for his C64 songs (such as Emlyn Hughes International Soccer and Gemini Wing), but also wrote music for other systems, as well as the PC.

Tokuro Fujiwara, the mind behind the Ghosts ‘n Goblins and Mega Man series, among other games, was born on April 7th, 1961.

And finally, as the youngest person in this list, legendary game designer and programmer “Yak” Jeff Minter was born on April 22nd, 1962. He began publishing games in 1981 under the company name Llamasoft, and wrote games like Gridrunner and Hover Bovver that redefined the simple, high-speed action game.

On April 11th, 1976, the Apple I came out, designed by Steve Wozniak and sold as a self-assembly kit with a limited production run. On the other side of the Atlatic, April 23rd, 1982, saw the birth of the ZX Spectrum, which was the first Sinclair computer not sold as a kit. Between the two dates (and geographically between the two countries of origin), the popular Game & Watch series began in Japan on April 28th, 1980, with the blandly-named Ball.

Now let’s look at the games that were published in April. Once again, there are some interesting titles to note.

Chronologically, the first game to mention is Pitfall!, which came out on April 20th, 1982. It is widely regarded as one of the best early action games, and one of the best games for the Atari 2600.

On April 29th, 1984, Space Ace came out, the second Don Bluth-designed laserdisc game after Dragon’s Lair. It followed the same principle: a movie is played from laserdisc with points of interaction every few seconds, and instant death for wrong or late player decisions. Despite the frustrating game mechanics, it was quite successful due to the high quality of the animation.

For LucasArts, and adventure game fans around the world, an era ended on April 30th, 1995: Full Throttle came out, which turned out to be the last game using the SCUMM engine that had driven all LucasArts adventure since 1987’s Maniac Mansion – indeed, SCUMM is an acronym of “Script Creation Utility for Maniac Mansion”.

The final three games I have already covered in my videos, so you can get more information there: Alleyway for the Game Boy came out on April 21st, 1989; Kirby’s Dream Land (also for the Game Boy) on April 27th, 1992; and The Lost Vikings for the Super NES on April 29th, 1993.

And that bit of self-promotion ends this month’s retrospective. As I discover more dates, let’s see if the next part will be even longer.