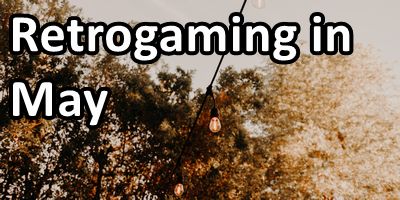 My article series about the history of gaming through the months of the year continues with May. Once again, many things happened, some of which shaped the development of computer and video games in unprecedented ways.

Like last time, let’s get the sad dates over with: Douglas Adams, the author of many books who often lamented that he was mainly linked to the Hitchhiker’s Guide to the Galaxy series, died 20 years ago, on May 11th, 2001. Apart from his books he was also active in other media, for example famously as the script editor for the 17th season of Doctor Who (and writer of two of its serials), but also as an author of several games: He was involved in Infocom‘s computerised version of The Hitchhiker’s Guide to the Galaxy, creating some of the puzzles and writing part of the text, then, still with Infocom, he devised the satire game Bureaucracy (but only provided one page of notes before disappearing), and later designed Starship Titanic and brought the text parser back to mainstream games.

The second sad date (though sad to a much lesser extent) ties in with that: Infocom was closed down on May 5th, 1989, after a couple of attempts to revive the text adventure genre as well as the company itself.

On a brighter note, we have a lot of birthdays to celebrate: Firstly, to stay with the Infocom theme for a moment, Steve Meretzky was born on May 11th, 1957. He was one of the most important authors at Infocom (and the programmer and co-designer of The Hitchhiker’s Guide to the Galaxy) and later wrote several games for Bob Bates‘ Legend Entertainment.

Next, two of the Amiga’s designers were born in May, “Padre” Jay Miner (who spearheaded the project “Lorraine”, the special chipset of the Amiga) on May 31st, 1932, and Dave Haynie, one of the Amiga’s chief engineers and main force behind the Amiga 2000, on May 23rd, 1961.

British game design guru, Steve Jackson was born on May 20th, 1951. He is the co-founder of Games Workshop and the Fighting Fantasy series of interactive books (the similarly famous label Steve Jackson Games, however, was named after a different person of the same name from the USA). Both the Games Workshop games, particularly those in the Warhammer and Warhammer 40K universe, and the Fighting Fantasy books have been turned into numerous games since the 1980s.

Peter Molyneux, the mind behind Bullfrog and most of their early games, was born on May 5th, 1959. While his name has become synonymous with great game concepts that suffer from a rushed execution and sloppy detail work, nobody can diminish his achievement of creating the first god game, Populous, and its thematic spin-off Powermonger, as well as the generally highly regarded Syndicate (as producer), Theme Park and Dungeon Keeper.

Finally, three musicians were born in May: the youngest, Jeroen Tel, on May 19th, 1972, the oldest, Karsten Obarski, on May 11th, 1965, and the middle one, Holger Gehrmann, on May 6th, 1968. Gehrmann was also a programmer and the co-founder of reLINE Software. He tragically died in 2008 at 39 years after falling from the sixth floor of a house. Karsten Obarski’s most famous work was the Ultimate Soundtracker, which introduced a new concept in computer-aided composition that had many imitators and has since evolved into several professional tools with industry-standard features. He also composed game soundtracks, notably for reLINE games such as Oil Imperium and Amegas. Jeroen Tel is still active as a DJ and composer in the Netherlands, and is chiefly known as a founding member of the Maniacs of Noise who provided music for many games on the C64 and Amiga. His compositions include fan favourites like Cybernoid, Stormlord and Supremacy.

After such an impressive list of names, it’s not surprising that May also included many other important dates.

One of the most groundbreaking games in its own right, Breakout came out on May 13th, 1976. After dominating the console market for a few years, in 1986 it saw a revival with Arkanoid that still continues today.

The King’s Quest series, Sierra’s flagship for many years and arguably Roberta Williams’ greatest claim to fame, began on May 10th, 1984. It was the first adventure game with an animated main character and also introduced Sierra’s AGI (Adventure Game Interpretation) engine that would drive their games for the next few years.

The shoot ’em up world was never the same after May 29th, 1985 saw Gradius/Nemesis, which started a series that continued until 2008. While it didn’t feature any substantial new inventions, it was (and still is) widely regarded as one of the finest examples of the genre, inspiring many copies.

To return to Infocom (and The Hitchhiker’s Guide to the Galaxy) one last time in this article, during the company’s peak the InfoTaskForce, a group of enthusiasts who wanted to have more options for playing that game, reverse engineered the z-machine that powered the Infocom games and published the first open z-machine interpreter (nameless, but usually called ITF after its creators) on May 25th, 1987.

The final milestone in the context of this retrospective took place on May 5th, 1992 with the release of Wolfenstein 3D. While it was not the first fully-textured 3D game (that appeared 2 months earlier in the form of Ultima Underworld), it already pioneered many of the features of next year’s Doom, which triggered the 3D game craze, and can therefore be regarded as a prototype of the later game.

The last two games to mention have not changed the world the way most other games listed here did, but were still popular and fun – and did come out in May: Teenage Mutant Ninja Turtles for the NES on May 12th, 1989, and F-1 Hero MD for the Sega Mega Drive on May 12th, 1992. TMNT was based on the animated series that had started two years prior, and strangely had nothing to do with the arcade game which came out the same year and was also developed by Konami (that one was ported to the NES the next year under the new name Teenage Mutant Ninja Turtles II: The Arcade Game). F-1 Hero MD was a racing game that had the distinct honour of being endorsed by Japanese race driver Satoru Nakajima.

And with that this article comes to a breathless end, in the hopes that the instalment for next month will be equally exciting.

The photos of Douglas Adams (by icarusjj), Jay Miner (by Hi-Toro) and Steve Meretzky (by Ben Collins-Sussman) are licensed under CC BY 2.0. The photo of Dave Haynie was taken by Hazydave and placed into the public domain. The featured image for this article utilises a photo by NeONBRAND that is freely usable. The other images are featured here under the assumption of “fair use”.